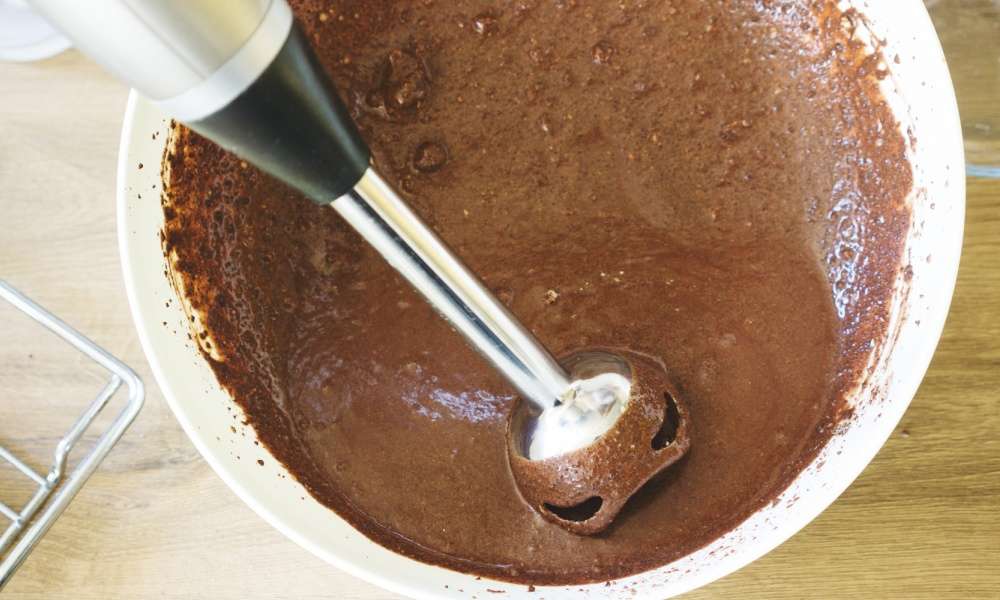 Blenders can be tricky to use. Some are giant and take up a lot of space, some are difficult to clean, and some are just downright scary. You know the movie scene where the actor “forgets” to put the lid on the blender and ends up shooting goo all over the kitchen and the ceiling? Nobody has time for all of that clean up!

Enormous blenders are messy in general, but an immersion blender is a lot easier to use and much simpler to clean. Maybe it’s time to try something a little different. Say goodbye to that terrifying monster of a blender and say hello to the easiest kitchen tool you’ll ever pick up.

The Oster immersion hand blender is still a blender, but a different kind of blender. Most blenders can’t just be put directly down into a bowl of ingredients, or a pot on the stove, or even a jar, and mix, chop, and stir them together with little to no mess and professional precision.

We’ve all used those enormous blenders that never seem to get your smoothie ingredients pureed to perfection. Sure, there are other appliances that can do that, but why have extra ones sitting around on the counter when you can just use this one simple blender?

What Exactly Does This Blender Do?

This type of blender has an insane amount of possibility. You’ll literally use this for just about any potential cooking need you could come across. You can blend together dressing ingredients for your salad, then use it to mix and smooth out the soup you made for dinner.

We can’t forget about those dessert milkshakes, where you can just drop the attachment into the cup to mix it all up with the precision of an industrial blender. Do you make jams or preserves? This baby can mix up all of your ingredients in the pot while it reduces, and then puree it inside the jar you store it in.

The Oster immersion hand blender in particular comes in a two speed option and a variable speed one. The two speed blender has a customer rating of 4.2 stars out of 5. It can blend, grind, and chop just about any ingredient.

It comes with an S-blade design for the best possible operation and a comfortable grip to keep any stress off of your hands and arms. It fits comfortably in your hand without having your elbow stuck in the air like you would with a regular hand mixer, and you don’t need two hands to use it like you’d need for a traditional blender.

The only customer complaint is that it seems to have an issue with the motor shutting down, but the company will replace it as long as you have your receipt. You can find it in several places as well, like retail stores such as Kmart and Target, or online at Amazon or the Oster website.

The Oster Immersion Hand Blender Has So Much Potential.

Seriously, this blender has endless amounts of challenges it can take on. It comes with a food chopper, in your preferred color of white or red, so you can chop up larger ingredients before adding them to your mixing bowl.

It also has a 250-watt motor for some serious power to get the blade through whichever recipe’s ingredients you’re using at any given time in just about any container. It’s also super easy to clean and the detachable rod is dishwasher safe on the top rack.

The Oster immersion hand blender with the variable speed options gets a 3.9 out of 5-star rating. It’s more affordable than the two speed option and only weighs about two pounds, so it’s easy to hold and just as easy to clean as the other option.

Keep in mind that the motor housing, the part you always hold, should just be wiped down with a damp cloth after use, as it is not dishwasher safe. Both blenders have so many possibilities and so many similar features that either of them would be the perfect addition to the kitchen. It may even replace a couple of the appliances that you already own!

Are You Going to Get Yours Yet?

How could anyone even think about turning one of these blenders down? It’s going to make cooking so much easier since it can handle everything mixing and chopping related.

Making potato salad? Use this bad boy to chop your potatoes, eggs, and pickles. Whipping up some cake batter? This blender will mix and smooth out that batter in no time.

Craving a chocolate milkshake? Throw all of your ingredients in a glass and drop this baby down in it to create the perfect milkshake. Once you get one of these, it’ll be a kitchen staple. With so many uses, it’ll replace your old fashioned blender and your hand mixer, thus creating some extra space on your kitchen counter.

Who doesn’t love counter space? The Oster immersion hand blender is fairly small and compact, so storing it is easy and you’ll have the empty space where your old blender used to be, not to mention the cabinet or drawer space you’ll free up when you no longer need your electric mixer and all of its pieces.

This blender is going to make your kitchen a place you’ll want to spend more time in, since it’ll be so quick and easy to whip up nearly any recipe with just one tool, rather than several different ones. Goodbye, scary blender, hello, simplified cooking!

At first glance, the Oster immersion hand blender might look a bit complicated, but it’s probably one of the easiest appliances you’ll ever use. With simple controls, easy storage, and fantastic reviews, it’s a wonder that not everyone has one yet.

Stop dirtying four different tools and fighting to clean beaters and blades, and treat yourself to an immersion blender instead. They’re affordable, but worth every penny, so you won’t regret buying one for your kitchen.