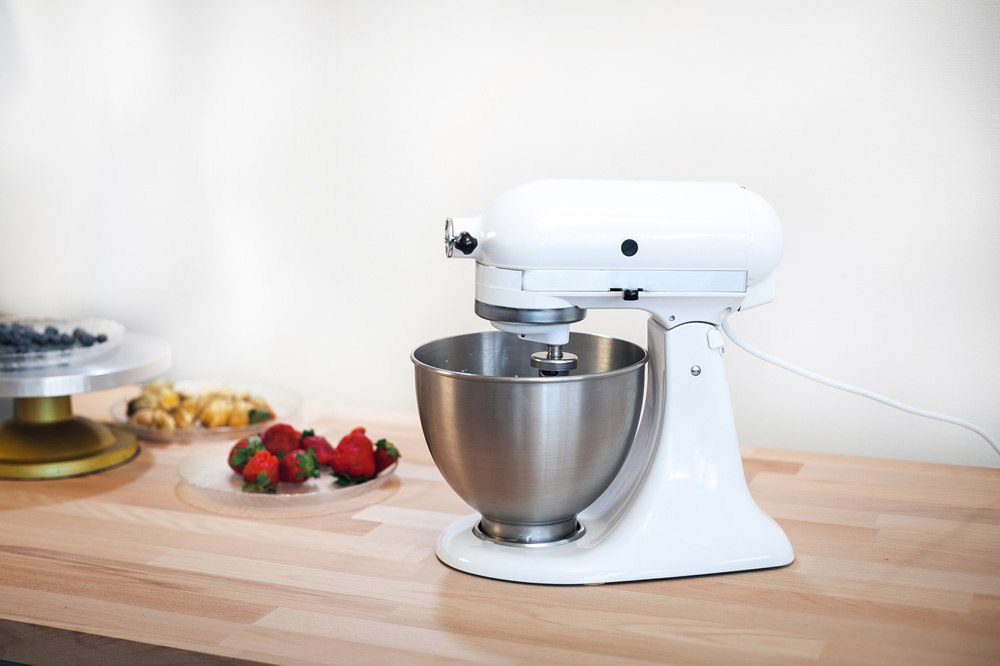 KitchenAid is a well-known kitchen manufacturer of kitchen appliances, and one such appliance is the KitchenAid Classic Series 4.5-Quart Tilt-Head Stand Mixer in white (K45SSWH). There are lots of impressive features such as its stainless steel 4.5-quart mixing bowl. It can mix dough for up to 3 loaves of bread, six dozen cookies or an impressive 6 pounds of mashed potatoes in a single mixing.

As if that’s not enough, KitchenAid sells this 250-watt mixer with additional mixing tools such as the flat beater, wire whip, and a dough hook. All these cooking tools are easy and safe to use as well as dishwasher-friendly.

In terms of mixing, KitchenAid’s Classic Series mixer comes with a tilting head stand which angles outwards for easy access to the bowl. With its 59-contact point mixing action, this mixer can achieve a thorough blend.

Also, KitchenAid has included an instruction manual as well as over 60 complementary recipes. This product comes with a 12-month hassle-free warranty. Below is a summary of these and other impressive features. 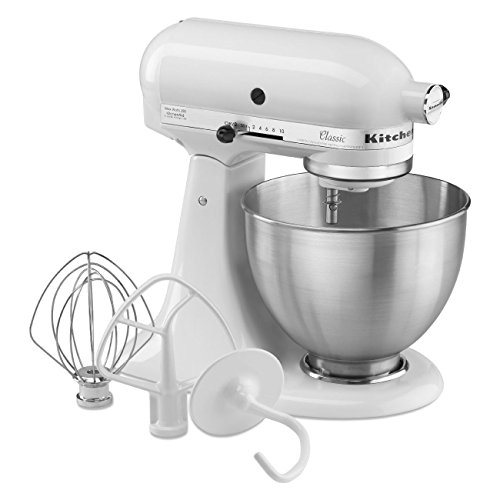 KitchenAid did not disappoint with this mixer with excellent performance and design. However, there were a few things that were not so good, one being the fact that this mixer overheats. Also, the gray finish which coats the stainless steel bowl comes off on the first few mixes.

On a positive note, this 10-speed 250-Watt mixer performs really well when it came to mixing. As mentioned earlier, the 4.5-quart mixing bowl can accommodate up to 6 pounds of mashed potatoes and enough dough for three pieces of bread or 6 dozen cookies. In addition, this mixer has an impressive 59-point mixing action guarantees all ingredients are uniformly mixed.

It’s also worth mentioning that the additional mixing tools included make this mixer value for money. The other tools include the flat beater, a dough hook, and a wire whip—all of which are easy to clean and dishwasher-friendly.

In terms of build and design, the mixer features an excellent tilt-head design with an all-metal build. In addition, the mixing bowl has a stainless steel coating which is not that impressive since it comes off with time.

This is comparing the KitchenAid White Classic Series 4.5-Quart Tilt-Head Stand Mixer with one from the same manufacturer, the KitchenAid Classic Plus Series 4.5-Quart Tilt-Head Stand Mixer (KSM75WH). Despite being made by the same manufacturer, these two mixers have some dissimilarities as well as similarities.

One difference these two mixers have is the power motor. The K45SSWH mixer has a 250-watt motor while the KSM75WH has a 275-watt motor. Although not a significant output difference, the KSM75WH motor can achieve a more uniform dough mix. In addition to being less powerful, the K45SSWH is also significantly heavier (24.25 lbs.) than the more powerful KSM75WH mixer which weighs in at almost 10 pounds lighter at 14.99 lbs.

Another significant difference between these two mixers is what’s included inside the box. While the K45SSWH ships with a flat beater, dough hook and wire whip, the KSM75WH comes with additional tools such as a pasta maker (not included in the K45SSWH). This means the more powerful mixer is also more versatile in what it can prepare.

Regarding similarities, both these mixers have the same bowl capacity, that is, 4.5 quarts. Both kitchen appliances have the same 10-speed mixing options and a 59-point mixing action in one rotation. Thanks to the tilting head feature in both these mixers, the bowl is easily accessible, with or without its contents. This ensures easy cleaning either by hand or dishwasher.

Overall, both these mixers will be an excellent addition to your kitchen appliances, be it at home or in business. This is thanks to their easy-to-use design and sturdy design. Furthermore, both mixers can handle large quantities of dough enough to feed the whole family or your customers.

Overall, the KitchenAid White Classic Series 4.5-Quart Tilt-Head Stand Mixer is an excellent kitchen appliance. It’s powerful and easy to use for all your home or commercial mixing needs. The additional tools that come with it make this mixer worth buying. Beware though—this mixer has a tendency to overheat. Nevertheless, it’s a great buy.