For a long time, the KitchenAid Metallic Chrome Artisan Series 5-Quart Tilt-Head Stand Mixer with Pouring Shield has been regarded as a strong workhorse in the kitchen. Users and online reviews are continually heaping price on this stand mixer from KitchenAid. It is a powerhouse in this market segment, and it can handle both the heavy bread dough and delicate whipping tasks with ease.

If you do not like the metallic chrome color, then you can choose from more than twenty other colors. This makes it easier to match it with your interior design. It also comes with ten power speeds, a 5-quart bowl and a pouring shield that makes it a great tool overall for mixing lots of dough. This is an excellent kneading device that will be a welcome addition to any kitchen. It gives you the quality and flexibility that merges the bridge between creativity and functionality. 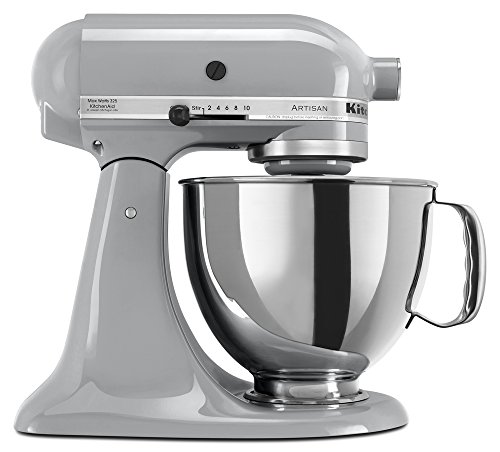 The name KitchenAid itself is a highly esteemed name in the industry with decades of experience. They have been excelling at producing top quality kitchen appliances that far exceed expectations. This brand has become one and the same with the best stand mixers.

The KitchenAid Chrome Artisan Series 5-Quart Tilt-Head Stand Mixer is built on this reputation. Not only does it have sufficient power for handling large mixing jobs, but also the control needed to handle small subtleties required in fine cooking. Several tests have shown that this stand mixer is a workhorse, and can meet the high demand of professionals with its versatile accessories and multiple speeds.

This stand mixer is flexible enough for large batches. More specifically, the 5-quart bowl can produce enough dough to make four loaves of bread. It handles kneading efficiently and mixes the ingredients without the need of repeatedly scraping the bowl.

The other notable feature that makes this stand mixer one of the best products is its tilt-head design. When combined with its compact size, the tilt-head feature enables users to add ingredients into the bowl easily. The small size also makes storage relatively easy when it is not being used, as it can fit anywhere with a decent 14-inch clearance.

Overall, the KitchenAid Chrome Artisan Series 5-Quart Tilt-Head Stand Mixer with Pouring Shield is a flexible, multipurpose stand mixer that works as promised. Its huge bowl can mix large amounts of dough in one batch, and its multiple speeds allow you to control the mixing pace. Furthermore, its impressive build quality and stylish design far surpass other mixers.

One of the leading contenders for this KitchenAid Chrome Artisan Series 5-Quart Tilt-Head Stand Mixer with Pouring Shield is the powerful Breville BEM800BSXL mixer. It features twelve adjustable speeds along with the capability of mixing and kneading large amounts in a single batch. A notable feature is the LED display mounted on one side, and it shows the best speed based on the current task. However, all these extra features mean that you should be ready to part with more money. However, this product does not seem to be very durable, especially when mixing heavy loads for a long time.

A more affordable model would be the Hamilton Beach Stand Mixer, which can handle small batches admirably. Its dual beaters, six speeds, whisks and dough hooks make easy work of ordinary baking tasks. Since the Hamilton Beach 64650 is more of a budget choice, it demands more effort from the user. You will have to manually turn the bowl and also scrape the sides regularly to get a better consistency. This is significantly much harder to use for multiple batches as compared to the KitchenAid Metallic Chrome Artisan Series 5-Quart Tilt-Head Stand Mixer.

In conclusion, the KitchenAid Chrome Artisan Series 5-Quart Tilt-Head Stand Mixer is among the best quality kneading machines. It has a tilt head, pouring shield, adjustable speeds, and powerful motor and also an overall high-quality build. Whether it is adding some egg whites into delicate recipes or making heavy dough, you can count on this particular stand mixer to get the job done efficiently. It is a must-have product for any home, especially for professional bakers.