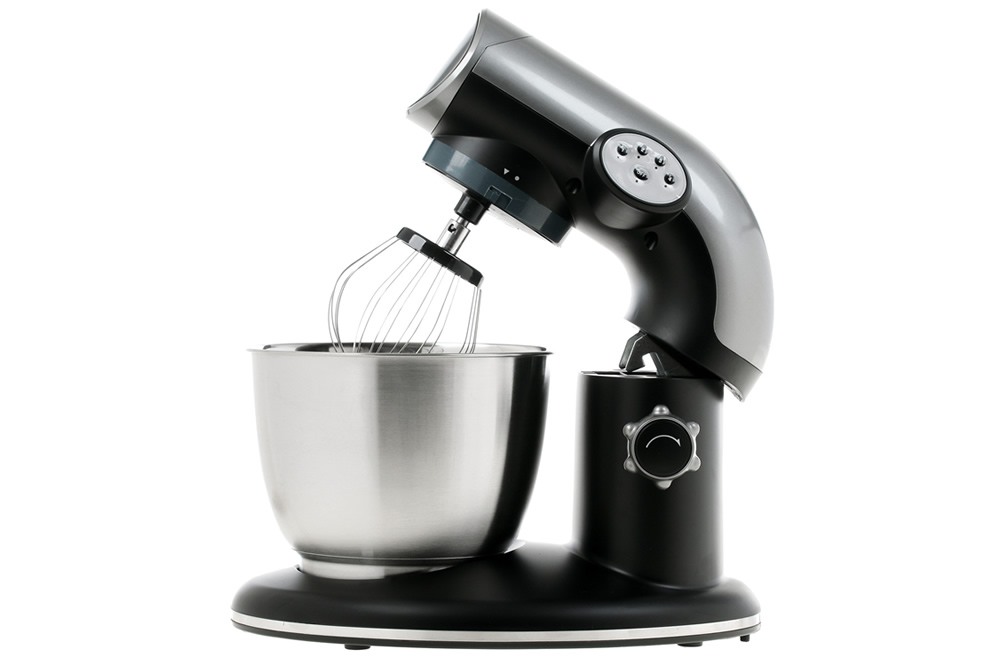 The KitchenAid 7-Quart Bowl-Lift NSF Certified Stand Mixer was primarily built for commercial purposes however it can still be used at home. This mixer features an ingenious design which increases performance capabilities. It is commonly referred to as the bowl-lift stand mixer mainly because of its design and how it works. It raises the bowl during kneading and mixing and then lowers it when it’s done, for easy bowl removal. By raising the bowl, the mixer can achieve a uniform mix.

This mixer has been certified by the National Sanitation Foundation (NSF) for commercial use. This is why it has its orange 71-inch power cable. Despite having a 1.3-horsepower DC motor, this kitchen mixer is powerful and quiet during mixing. Also, it maintains a cool temperature despite mixing even the toughest dough.

The mixer comes with added versatility and convenience thanks to its ten speeds. Also, planetary mixing action enables independent mixing to achieve a uniformly mixed dough. The KitchenAid 7-Quart Mixer features an all-metal zinc die-cast build which makes it stable and sturdy for home use and more importantly, commercial use. 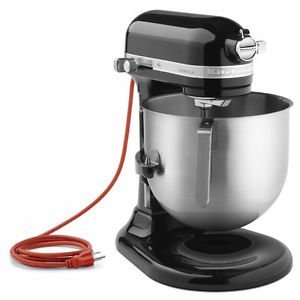 Primarily, this kitchen appliance is built for commercial purposes as it has even been certified by the NSF, a regulatory body which thoroughly inspects products to ensure industry standards are met.

With that said, this is a powerful mixer thanks to its 1.3-horsepower DC motor. Also, it has a 10-speed function which adds to the versatility and convenience. Moreover, the attachment hub accommodates all KitchenAid attachments, making it even more adaptable. The mixer ships with additional attachments such as a professional wire whip as well as the wide flat beater.

Its powerful motor also enables it to knead pizza dough and more impressively, remain cool and silent throughout the entire kneading period. The mixer has a commercial-style handle which makes this large appliance easy to handle. The bowl is easy to remove and clean either by hand or using a dishwasher.

In this review, we compare the KitchenAid 7-Quart Bowl-Lift NSF Certified Commercial Stand Mixer with the Cuisinart SM-70BC mixer. Some notable differences between these two mixers included price, item weight and speed.

When it comes to speed, the Cuisinart SM-70BC is more versatile thanks to its 12 speeds while the KitchenAid 7 Quart has 10 speeds; this means that the cheaper mixer is more versatile. In terms of item weight, the Cuisinart SM-70BC is lighter, weighing in at 25.1 pounds while the KitchenAid 7-Quart Bowl-Lift NSF Certified Commercial Stand Mixer has a shipping weight of 40 lbs.

Another difference is that while the KitchenAid mixer is certified by the NSF, the Cuisinart SM-70BC lacks certification. This means that the latter is guaranteed to last longer and perform better in a business premise.

Regarding similarities, both the Cuisinart SM-70BC and the KitchenAid mixer have the same bowl capacity of 7 quarts which is impressive. The difference in mixing speeds means that the dough mix will be varied however that’s not to say that the mixer with the lower speed achieves a less perfect mixture.

Overall, both these mixers perform impressively. However, with the KitchenAid 7-Quart Bowl-Lift NSF Certified Commercial Stand Mixer, you will have to dig deeper into your pockets, and that’s not to mention the shipping charges you’ll incur.

In summary, the KitchenAid 7-Quart Bowl-Lift NSF Certified Commercial Stand Mixer is easy to use and performs quite well. Its bowl capacity is convenient for commercial purposes, and its sturdy build guarantees a long lifespan even under heavy usage. However, it’s a pricey mixer, plus buyers will have to pay additional shipping costs which is a deal breaker for such an excellent product.